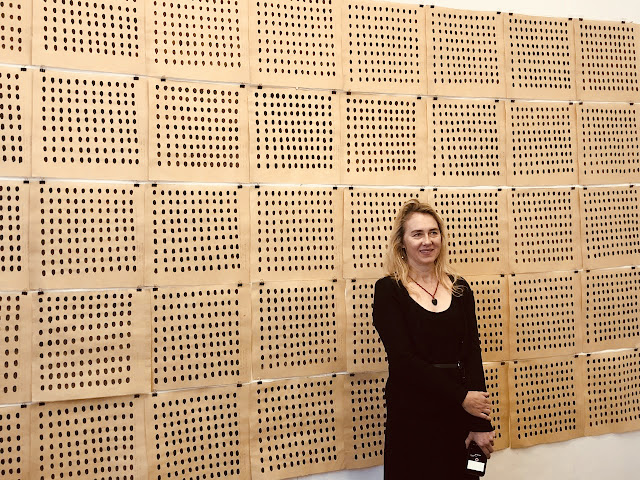 Hanien Conradie:
It was around 2015 that Colin Campbell and I embarked on a project where we committed to chant every day for 40 days around a specific theme. After the initial chant, we explored various Sanskrit chants and their effects for periods of 40 days, 49 days and most recently we completed a chant of 108 days. It was astounding what happened during those times. It raised many questions around what chanting and prayer is.Out of this process arose a practice in my studio, where instead of keeping track with a string of malabeads, I would record my chants through fingerprints on paper over predetermined periods of time. 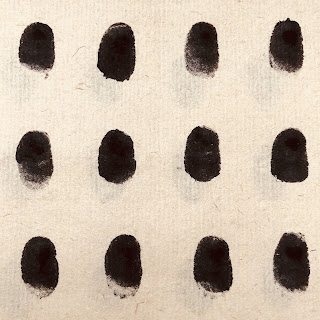 The first 40 Day Prayer I completed in 2017 was created as one work which consisted of 40 pages of soot ink fingerprints on grass paper. Each page was individually created on a specific day with a unique overall theme in mind. Upon viewing the completed work, people were requested to take one page (or day) home with them; thus suggesting the breaking up of the work into individual pieces. I resisted this for the beauty of the piece was seeing the time that passed over 40 days in the 40 sheets of paper.

In this new 40 Day Prayer, I decided to open the work up to my community and invite people to request certain days that would be dedicated specifically to them. The end result is 40 Prayers of 40 Pages that will be dispersed all over the world as they reside in 40 different locations. I see each person who has reserved a prayer as a custodian of his/her prayer and as part of the community of this specific prayer for transformation.

Transformation as a theme came from the time of the prayer. I chose to start the prayer on the 1st of August to accompany us through the change of season from winter to spring in the Southern Hemisphere. The process ended on the new moon of the 9th of September. This day is a significant date for religions based on the lunar calendar, as it represents the New Year. The theme of ‘transformation’ was interpreted by the participants in many ways: There were prayers for healing illness, for scholarly endeavours, for departures and journeys, for relationship trouble, for anniversaries and for significant birthdays.

The prayers are based on the format of a Buddhist chant, with a 108 repetitions (fingerprints) per day. Each prayer was made on a specific day with a specific person in mind. 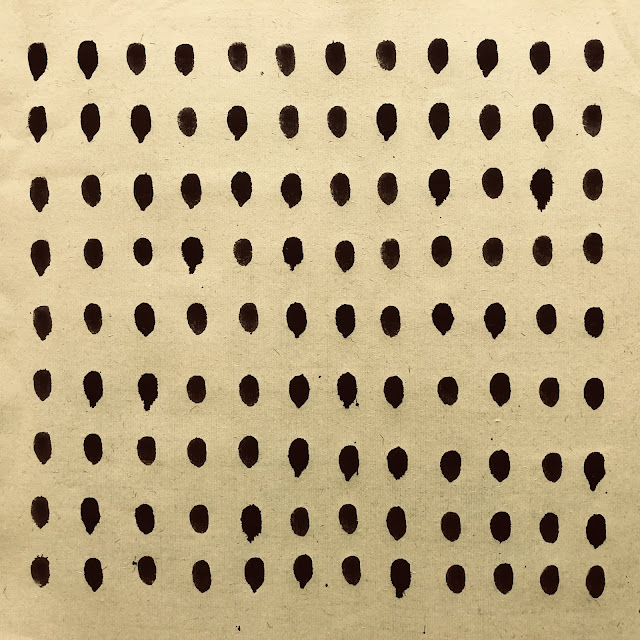 Colin Campbell:
There is a story that I always like to tell in relation to chanting. When I was a child we were in the Northern part of Botswana with my father [who was an anthropologist] and we were camped on the river bank of the Savuti Chanel. There was an ornithologist who was world renowned who came on the trip with him; scientists often accompanied us on our travels. Everything ‘bird’ this man knew. When a bird tweeted he didn’t even have to look around, he would be able to identify it immediately.

"What is that bird there and what is he doing?” I asked the ornithologist.  He replied that it was a Black Headed Auriol and that he is calling for his mate. 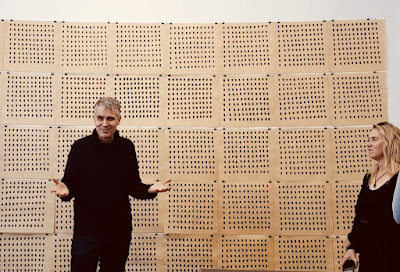 Ten years later I was sitting beside a river in another part of Botswana and there, once again, I heard the Black Headed Auriol going. Sitting right next to him was his female mate doing the same thing. They sat there together doing this for two hours!
So clearly there was something else going on, besides the calling of a mate. 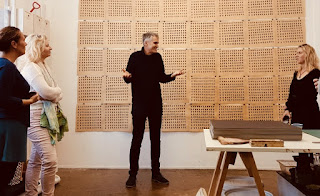 When you look at Palaeolithic art in Europe and rock art in Northern Botswana, a lot of the caves have fingerprints as motifs on their walls – repeated: hundreds of them, thousands of them. Were they doing the same thing? There is something about the fingerprint and our own ancientness; there is something about the repetition as an invocation, as a prayer. And what is a prayer but an invocation? This repetitive component is a very fundamental part of a particular way of engaging deeply with oneself and all that is greater than ourselves.

One of the difficulties we sit with in contemporary times is the separation of art from the commune. So you have the stage and we sit watching the people whose specialty it is to perform, or we go to an exhibition and we look at artifacts on a wall created by a specialist of that trade.

Somehow there has been a removal of the art form from our involvement as humanity; as a community. In this work art comes back into a place where it becomes a medium for something. We see it moving into an interactive thing once again. 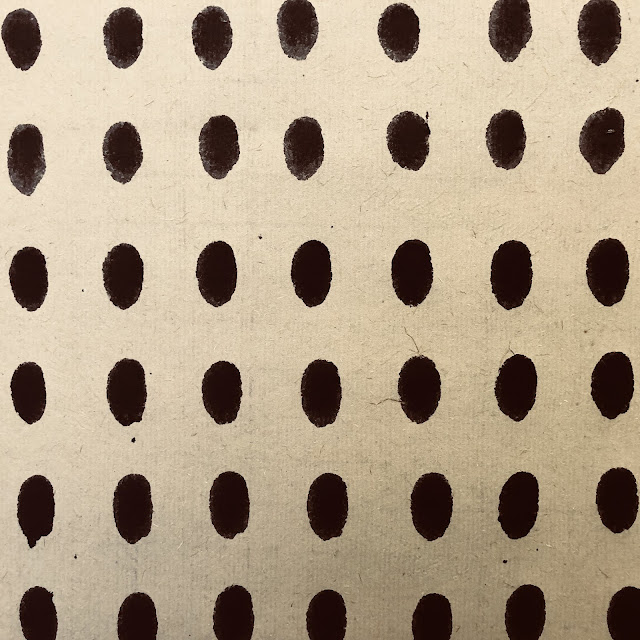 This work thus represents a whole lot of people who were involved in a very particular way. Watching Hanien go through her different social media platforms in the mornings I noticed that this really simple process stirred up an enormous amount of interest.  For me that has been really profound.

Seeing it as a collective here today of the last 40 days and then looking at each one and remembering on certain days certain things were happening. The character of event also recorded here I think is phenomenal.

Today is the only day that they will all be here as one. From here they will be dispersed to various homes all over the world. It is really wonderful to see you people who were a part of this here today, together with this collective work and to say to you what an amazing project that has just emerged. It has a certain kind of fresh uncalculated quality to it because it was totally emergent and there is a purity of art form that I think is really profound.

I was thinking back on the chants that we have done, and it struck me that each chant has a particular character and that ‘character’ worked us at that particular time. Some of them were tough and ruthless, and some of them were gentle and expansive. All of them I am grateful to have done. The chants build up every day, and when you get to day 30 it has created pretty much its own reality, which is incredible. 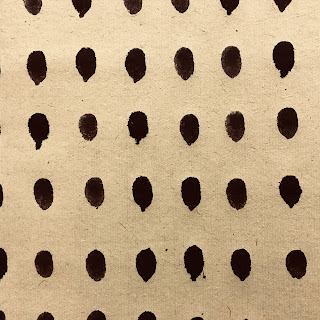 Watching Hanien go through this and watching how it worked her, how each prayer had its own particular character there are so many interesting and unanswered questions in this work. It has in it the notion of prayer, the notion of art and the inextricable relationship between these two qualities of being human: connection and creation.

That is really what this is about. 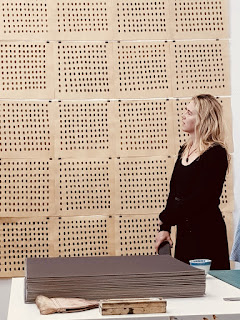 Someone here said that she experiences this visual chant as a choir of many individual voices. It certainly has that synasethetic quality, and I asked myself this morning whether this is what the sound of a 40 Day chant looks like. I am aware that whenever we chanted the effect of the sound expanded like ripples into our communities but also after the finish of the chant, its echo still worked on us and changed things in our lives. How to visualize this is a question.

The first day the soot ink (which I prepare daily) was very runny and the rhythm of the prayer was new, so there was a lot of dripping in it. By the last day I had mastered the exact fluidity the ink which enabled me to navigate gravity and the very absorbent quality of the paper. This visible transformation showing my developing relationship with the materials  tells of the internal and more invisible aspects of the prayer.

There was also the shifts in mark making depending on the person I was holding in my mind. The day before spring for example, I was working with someone I had never met called Margaret Bowker. Margaret I have subsequently been told, is a very neat and impeccable lady. On that day my fingerprints became most perfect and I felt I had a better control over the variables which influenced the mark making from then on. There were many encounters like this where the intent of the prayer influenced my sensitivity to weather, sound and a sense of the person on that day.

The most unexpected part of this prayer was the role of social media in the project. As an artist who works with the natural world and place, one wouldn't expect technology to play such an important role in such a project about spirit. However in this project it formed the main vehicle of connection - creating a community of people connected through a daily practice.

One of the participants recounts how she first encountered the prayers on Facebook. She expressed that she followed the prayers daily and experienced them as non-static and alive.

"Every time I opened the page to check the daily prayer I felt air on me, every time I almost moved backwards, because of this ripple I felt and I took a breath. And then I would check who it was for and why. And every time I had a little [heartfelt moment] and thought 'there goes that one'. So quite interesting that there is now an electronic aspect to this and that the prayers can move around the world in this way."

I believe this project has huge potential to connect people, bring awareness and do much more. If you are moved please let me know if you would like to join my next 40 days. 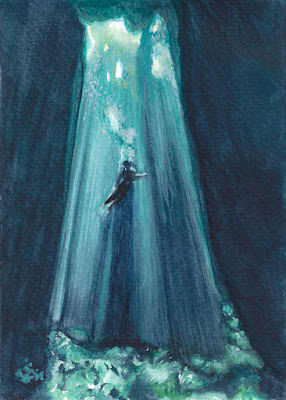 At the beginning of the COVID-19 lockdown, I set up a small desk in my bedroom as a makeshift studio. Armed with a set of newly acquired Winsor Newton artist’s-quality watercolours and a stack of Fabriano postcard paper books, I set myself the task of completing one painting a day. My partner’s father, an archaeologist by profession, had left us with piles of old National Geographic magazines; each one full of their remarkable photographs. Daily, I thus selected an image that resonated to inspire a small watercolour that reflected my internal state.  The chosen images were mostly of single human beings, dwarfed by the vastness of implacable natural settings, in places that evoke the experience of the Sublime. These were always challenging environments: places too severe for human habitation, potentially life-threatening situations.  I was grateful to the brave image-authors for bringing spaciousness to the constraint of lockdown. Several images fell outside this theme, b 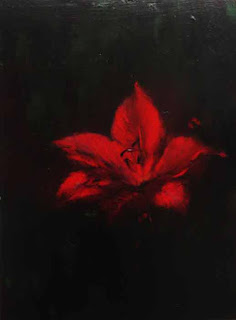 The Three Ecologies by Felix Guattari

Even though The Three Ecologies was published in 1989, and offers some approaches to the global ecological crisis, most of the problems it highlights still continue today, some have even become more amplified as we persist to collectively commit ecocide as a species. In this book, Felix Guattari re-defines the dictionary meaning of the word ecology, traditionally limited to the natural world, and extends its meaning to include human subjective ecologies and socio-political ecologies.  The main problem with the crisis of our era he asserts lies in the separation of these three registers. What interested me as a painter is that Guattari suggest that we all become more like artists. He says: It appears crucial to me that we rid ourselves of all scientistic references and metaphors in order to forge new paradigms that are ethico-aesthetic in inspiration. My project Spore , used Guattari’s The Three Ecologies as a theoretical foundation. The main theme of the project was